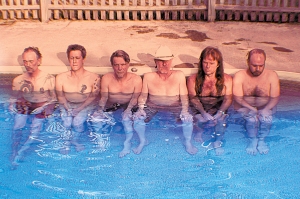 We are unbelievably excited to announce we’re teaming up with Birmingham Promoters to bring the legendary Swans to HMV Institute Birmingham in April!

Swans are an influential American post-punk band initially active from 1982 to 1997, led by singer, songwriter and multi-instrumentalist Michael Gira. The band was one of the few groups to emerge from the early 1980s New York No Wave scene and stay intact into the next decade. Formed by Gira in 1982, Swans employed a shifting lineup of musicians until their dissolution in 1997.

After years of pursuing Angels of Light and recording and producing a diverse roster of artists for his Young God label, Michael Gira decided to reconvene his legendary group in 2010 to release the much-acclaimed ‘My Father Will Guide Me Up a Rope to the Sky’, followed by 2012′s brand new album ‘The Seer’.

“The rule book is torn up and incinerated here, but this shouldn’t even be a surprise, considering that’s what Swans made a career doing. Surprise! Swans aren’t dead.” – FACT